ICC Rankings: Malan’s world record:  India’s star cricketer Suryakumar Yadav is engaged in carrying forward the victory chariot of Team India by playing one after the other in the T20 World Cup. He has so far scored three half-centuries in five innings in the tournament, in which he has also been unbeaten twice. Looking at Suriya’s current performance, everyone is expecting a similar performance from him in the semi-final against England. Surya also does not want to disappoint his fans and will try his best to take India to the final. However, he can give a big blow to England even before the match.

must read this also :- India will be the final match in the semi-finals

ICC Rankings: Malan’s world record :- Suriya, who made his T20 International debut last year, is currently in the best form of his career and is creating new records every day. The way this 32-year-old right-handed explosive batsman performed against South Africa and then Zimbabwe, now a big world record has come on his target. Surya, the only cricketer to hit more than 1000 runs and more than 50 sixes in T20Is this year, is now eyeing the world record of England star batsman David Malan, who could be shattered even before the semi-final clash against England. 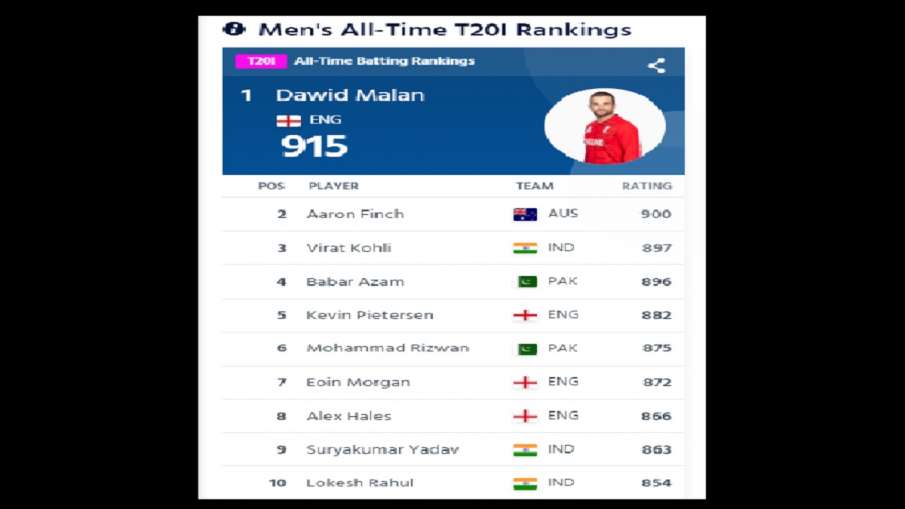 3 players from England on target

Surya, who is ranked first in the ICC T20 World Rankings with 863 points, is now on the verge of creating a new history in the all-time high rankings. In fact, the world record for scoring the highest 915 points in ICC’s T20 rankings is recorded in the name of Malan. Malan made this record in 2020. Apart from him, Aaron Finch of Australia is the only other cricketer who has touched the 900 mark. Virat Kohli’s record is the best for India and he had scored 897 points. After him, Babar Azam (896), Kevin Pietersen (882), Mohammad Rizwan (875), Eoin Morgan (872), Alex Hales (866) are included in this list.ICC Rankings: Malan’s world record

Surya has a chance to touch the magic figure of 900

ICC Rankings: Malan’s world record :;- Now if we look at Surya’s current ranking and his points, then he currently has 863 points and he is in 9th place in the all-time high ranking. But in the new ICC rankings coming on Wednesday (November 9), touching the figure above 900, Malan’s world record can also be broken. This is possible because the last ICC rankings were released on 30 October. After this, Surya’s performance was even more dangerous. He played an unbeaten 30 off just 16 balls against Bangladesh on 2 November and then 61 off 25 balls against Zimbabwe on 6 November. In such a situation, due to his performance, his rating point is sure to increase. He is just 52 points away from breaking Malan’s world record, while he needs only 37 points to touch the 900 mark, which is possible. ICC Rankings: Malan’s world record